A Killing in the Hills: A Novel (Bell Elkins Novels #1) (Paperback) 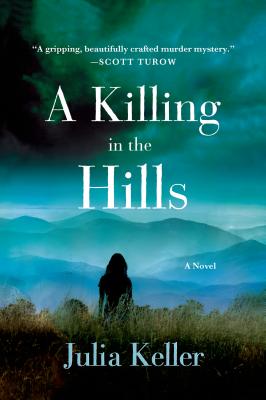 Other Books in Series

This is book number 1 in the Bell Elkins Novels series.

“Keller makes a powerful entry into the crime fiction field with the introduction of Bell Elkins, a prosecutor in rural West Virginia, who must not only deal with a triple murder but also must constantly contend with a deteriorating society beset by the scourge of methamphetamine. Finely drawn characters, strong plot lines, and keen attention to a growing problem in rural America make this a gripping read.”
— Bill Cusumano, Nicola's Books, Ann Arbor, MI

In A Killing in the Hills, a powerful, intricate debut from Pulitzer Prize-winning journalist Julia Keller, a mother and a daughter try to do right by a town and each other before it's too late.

What's happening in Acker's Gap, West Virginia? Three elderly men are gunned down over their coffee at a local diner, and seemingly half the town is there to witness the act. Still, it happened so fast, and no one seems to have gotten a good look at the shooter. Was it random? Was it connected to the spate of drug violence plaguing poor areas of the country just like Acker's Gap? Or were Dean Streeter, Shorty McClurg, and Lee Rader targeted somehow?

One of the witnesses to the brutal incident was Carla Elkins, teenaged daughter of Bell Elkins, the prosecuting attorney for Raythune County, WV. Carla was shocked and horrified by what she saw, but after a few days, she begins to recover enough to believe that she might be uniquely placed to help her mother do her job.

After all, what better way to repair their fragile, damaged relationship? But could Carla also end up doing more harm than good—in fact, putting her own life in danger?

Julia Keller, winner of the Pulitzer Prize and former cultural critic at the Chicago Tribune, is the author of many books for adults and young readers, including A Killing in the Hills, the first book in the Bell Elkins series and winner of the Barry Award for Best First Novel (2013); Back Home; and The Dark Intercept. Keller has a Ph.D. in English literature from Ohio State and was awarded Harvard University’s Nieman Fellowship. She was born in West Virginia and lives in Ohio.

“A Killing In The Hills is a gripping, beautifully-crafted murder mystery that shows that small-town West Virginia is no longer Mayberry. Great reading.” —SCOTT TUROW

“Julia Keller is that rare talent who combines gripping suspense, a fabulous sense of place and nuanced characters you can't wait to come back to. A must read.” —KARIN SLAUGHTER

“A Killing in the Hills is a remarkably written and remarkably tense debut. I loved it.” —DENNIS LEHANE

“Julia Keller's A Killing in the Hills is a terrific debut--atmospheric, suspenseful, assured. I hope there's more to come in the story of Bell Elkins and Acker's Gap.” —LAURA LIPPMAN

“Be careful opening this book because once you do you won't be able to close it. Instead, clear the weekend, silence the phone and settle into Acker's Gap, a place as fascinating and fraught with violence and beauty as Daniel Woodrell's Ozarks or William Gay's Tennessee. A killer novel.” —TOM FRANKLIN

“A twisty plot--and a soulful depiction of a beautiful, besieged "afterthought of a town"--propels this debut mystery.” —People Magazine

“Keller perfectly captures the ennui of a community paralyzed by poverty and despair, and the pride of people who refuse to succumb to the insidiousness of drugs. . .A powerful debut.” —Oline Cogdill, South Florida Sun-Sentinel

“Outstanding. . .Keller does a superb job showing both the natural beauty of Appalachia and the hopeless anger of the people trapped there in poverty. . .Unforgettable.” —Publishers Weekly (starred review, Pick of the Week)

“A fictional debut for a Pulitzer Prize–winning journalist, born and raised in West Virginia, whose love for the state, filled with natural beauty and deep poverty, pervades a mystery that has plenty of twists and turns and a shocking conclusion.” —Kirkus (starred review)